It’s the August full moon of midsummer, a time which always brings back memories of summer Sundays at my grandparents’ cottage on a lake in Massachusetts.

By 4th of July, the hand-dug well on our farm had always gone dry so baths and shampoos were out of the question.

As a substitute for Saturday nights in the bathtub, we drove to my grandparents’ cottage once a week and the lake was supposed to wash away the grime that had accumulated during the previous week of wandering barefoot on the farm.

The Sunday soaking ritual always took place with our five other cousins during unsupervised “swimming” in front of the cottage while the adults downed bottles of Schlitz and Old Milwaukee, out of sight at the top of the property. The quotation marks are here because the other cousins were all good swimmers. Very good swimmers. They were fearless. They water-skied, they jumped off the dock, they dove for quarters thrown in the water. They were like black labs–balls were thrown and retrieved. They had endless water games in their repertoire.

My siblings and I didn’t have a clue. We stood in water up to our knees with our arms folded self-consciously in front of us until we gradually waded deeper, the waterline creeping up our bathing suits, one excruciating inch at a time. I was supposed to keep an eye on the two of them and make sure they didn’t accidentally wander into deep water.

I always hated my responsibility as the one in charge of the younger ones, an unfair role assigned by the random cruelty of birth order, and I said as much.

Mummy finally decided it might be appropriate to enroll us in swimming lessons, mostly to cover her ass if anything happened out there. Harsh judgment on my part, but probably true.

On Day One of the swimming lessons, Mummy pulled her green ’56 Plymouth station wagon up to the curb at the Town Pool. My brother and sister and I got out. We had our towels around our necks and our flip-flops on our feet. We held hands, as we’d been told, and I carried the registration envelope.

Dicky wore his new “supporter” of which he was quite proud. Mummy made quite a big deal out of purchasing his first jock strap, and he was supposed to take the swimming lessons in stride like a “big boy”. Sharon and I wore matching pink tank suits.

Without looking back, we climbed the sidewalk mountain to this place we’d never been. We didn’t hear the station wagon drive away, but we knew Mummy left without a glance back as soon as she heard three doors slam.

As we reached the summit of the park, we saw bleachers at the water’s edge down below. We pressed on. Slowly and carefully, we trod down the concrete steps towards the black water that stretched for a mile wide, or so it seemed.

I was the eight-year-old babysitter, timidly leading the five and six-year-old, one clasped at each side of me.

Chatty pastel-clad mothers were sitting on the bleachers in sunglasses and sun hats, flicking their cigarette ashes onto the grass. A card table stood in the bright sunlight with tidy boxes of index cards and a line of kids and mothers in front of it. We joined the line and soon it was our turn to register.

A man with a whistle on a cord around his neck looked up at us over the top of his sunglasses as he flipped through the index cards.

I handed over the envelope. The man filled out more index cards and then someone came along and divided us up. My brother Dicky went to the right with the “minnows”. Sharon went I don’t know where. Another group of minnows, I guess. I squinted into the sun as they were led away.

I was then directed to yet another group. I had no previous swimming experience but I was tall for my age. Maybe I was in the group of bigger non-swimmers.

So it was, as we attended our weekly swimming lesson at the Town Pool. Each week, after that forbidding event, we somehow found each other, held hands, and fled back up the steps with our towels, over the top, and down to the circular drop-off drive. Eventually, our calm was restored as we waited silently in a shady patch of grass to avoid being hit by a car. My mother always told us to stay away from the street. It was dangerous.

Each week, there was always the matter of the long wooden docks that stretched out towards the middle of the dark, deep water. I knew that both of my siblings were afraid. When I heard screaming, and squinted in the distance, I saw Dicky crying loudly, his chest rising and falling with his uncontrollable sobs. I was never able to find Sharon anywhere.

The three of us never discussed the swimming lessons. The experience was too painful to put into words. At home, Mummy and Daddy never asked us about it, so we never told.

At the end of summer, the day arrived when we would all be tested for our achievement. After a brief test of floating and dog paddling in the shallow water, all of the swimmers—and I use that word loosely—had to jump off the dock in order to pass the test.

I did what I was told. I floated on my back, although that was not due to any particular skill. I always had the ability to float upside, sideways, Dead Man’s Float, any kind of float. I could float in a hurricane. For a skinny kid, I had a high body fat ratio.

When it was my turn to demonstrate my learned skills, I swam the dog paddle, floated, treaded water. I jumped off the damn dock where my swimming certificate was being held for ransom.

I succeeded, glub, glub, glubbing to the surface with water up my nose, and received my Minnows certificate with the automatic assignment to next summer’s Flying Fish class.

Mummy never let us finish anything we started so I knew that I wouldn’t be back next year to take the Flying Fish lessons.

I saw Dicky standing on the end of the other dock. All of the other kids had already jumped in and passed. I saw them standing impatiently in the water, while his instructor pleaded with Dicky to jump. Another instructor was in the water below, ready to catch him, if need be. All he had to do was jump.

I sniffed in disgust—not at Dicky—at the fruitlessness of the scene. I knew that there was no way in hell that Dicky was going to jump off that dock.

We returned to Sundays of unsupervised “swimming” at my grandparents. One time, with my body tucked firmly into a highly-inflated rubber tire tube, I drifted into deep water where I couldn’t touch bottom. (“Stay where you can touch bottom,” Mummy always said.)

Somehow I got flipped over. My head was under. My legs were pointing skyward. My body was wedged firmly in the opening with no option of sliding out.

I couldn’t breathe. I panicked. For the first time ever, my eyes were wide open underwater. I saw the posts of the dock, the legs of the other kids in the distance. I saw some broken water toys on the bottom. I even saw a few fish swimming around—probably laughing at my demise.

I was kicking, squirming, flailing, thrashing. No one heard me. I knew I was going to die. So this was what drowning felt like. My sad fate would be announced on the front page of the local newspaper, with a brief obituary inside. They’d be sorry now!

I continued to thrash in the water, drifting further under the dock. Try as hard as I might, I couldn’t break the suction of the tire tube from the surface of the water. Then, with one final burst of adrenaline, I popped back up.

As I celebrated my survival with painful, sputtering coughs and a deep, cleansing breath, I saw my cousins, my sister and my brother. They were all frolicking near the shore, and all oblivious to my plight.

Years later, I still wonder where my mother went during that weekly hour of swimming lessons. There were never grocery bags or other signs of her destination.

Sharon learned to swim but she, I discovered a few years ago, is still terrified of water where she can’t see the bottom. Dicky never did learn to swim, and my mother never thought to ask why his bathing suit was always dry

from the Girl with the Black and Blue Doll, Linda Summersea 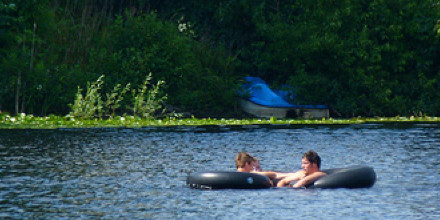