I had a dirt path epiphany this week. A grounding, as it were.

We moved to this mostly paved, though very rural, island nine months ago. Previously, we lived an isolated 45-miles-from-a-decent-grocery-store, dirt road lifestyle on a lake in the Ozarks.

Now that we’ve been here for nine months, a period equal to full term human gestation, I’ve come to  realize that I’ve been missing a critical element in my personal human needs. After nine months “in island utero” I found that I was getting downright snappish.

It wasn’t the isolation from the mainland. I like the fact that we’re an island of mostly kindred spirits with a population kept reasonably low by the lack of a bridge.

It wasn’t for lack of solitude. I replenish my need for reflection with long solo walks on the beach almost daily.

It wasn’t for lack of physical activity. Yoga and aqua aerobics give me more of that than I’ve had in the past twenty years. Or, even human contact. I’ve met a few people, but this isn’t about human connection. That’s another story altogether.

I entered the island forest last week, looking for a change from the beach. I hadn’t walked in the forest since April. As I headed into the woods, I remembered that, once inside, all sound of the outside world is masked in silence.

With each footstep deeper into the forest, I found myself fondling the tender spot that resides deep inside my psyche. I was surrounded by an atmosphere of hypersensitivity.

Even my dog, Lily, seemed to get it. She bounced along beside me, both of us practically floating. Rich humus absorbed our steps, decades of soft organic soil. No echoes. No distractions. Just absorption.

All I want to say is that feeling the earth, walking on it, lying down upon it, digging in it, kneeling low to the ground is restorative.

Since I had just finished a huge writing project this week, I returned to the forest the next day for more of the same. I was also able to head out to my garden this morning and devote three hours to the sweaty task of digging, pruning and weeding.

There in the garden I found myself experiencing more of the same grounding that I felt in the forest—and that led to this blog post. If you’ve read this far, perhaps you’ll forgive me this brief bit of touchy-feeling. I needed to remind myself of the value of a true earth connection.

“Of all the paths you take in life, make sure some of them are dirt.” John Muir 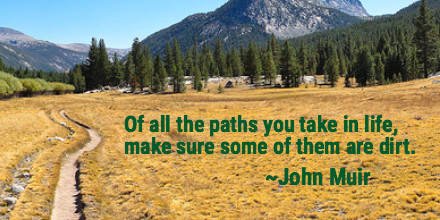