On March 8th, I posted on Facebook that I was going to add Humor to my memoir. Humor. What was I thinking?

Those who know the story of my challenging childhood were probably taken aback because only one person “liked” it (That was you, Nancy Harris.) and no one commented.

With Facebook “likes” being the modern measure of approval, I’ll admit that my insecure self began to unravel a bit on the edges, wondering if I had made the right decision.

My essay writing in high school had always tended to be self-deprecating.

I remember that even as my peers sat sullenly watching the clock as it ticked towards lunch, my teacher usually shuddered with laughter as she read my work aloud. Mrs. Davis’ reading glasses shook down the length of her nose until she stopped and readjusted them several times. Fortunately, she had those chain thingies tied to the ends of the frames.

It was that memory of humor successfully covering my sadness that led me to decide. I can laugh about this.

I began a halfhearted attempt at yet another revision, this time injecting it with what I hoped might be laughable. I looked for the humor behind the angry glances, harsh words and tough times. Mummy’s meanness, Daddy’s sullenness. The 720 high school days when I ate my lunch alone. (Yes: 180 x 4)

I wasn’t sharing the results with anyone. I tried to judge for myself. Not always easy. Would this fly? Maybe.

I spent a couple of weeks holed up with my manuscript in a timeshare in the Berkshires, and after seeing Augusten Burroughs’ Lust & Wonder quoted in GoodReads, I knew I had to run out and buy it immediately. I tucked it in my tote bag for the flights home.

Augusten Burroughs is the man who was Running With Scissors in Amherst while I was running away to UMASS. We were living within the same coordinates during the 70s— and I didn’t even know it until this past weekend! (Neither did he—but it’s probably not that big a deal to him.)

I opened to page one as soon as my first flight left the tarmac. Soon I was laughing out loud and hoping I wasn’t disturbing anyone.

Burroughs’ story is not a funny one. It’s about love, misunderstandings, disease, and broken hearts (multiple times), but Burroughs manages to inject hilarity into his memoir while still telling his true, sad story. It’s beautiful.

One of the craziest, most relevant, points he made— that really hit home with me—is that when your childhood is as insane as ours, of course you always think your life is going to go to hell when something good happens!

You can’t believe that life could really be that good without falling apart, and more than likely, in the very near future.

I always thought that I had simply inherited the Worst Case Scenario gene.

But no, that wasn’t it at all.  I had been programmed from a very young age to fear all good things falling apart and I managed to not notice this until now.

Suddenly I was back in Mrs. Davis’ class. Tragedy can be funny. Very funny, in fact.

I had decided to tag pages that clicked with me, never imagining that when I was finished, the book would be thick with sticky notes and scribbles.

After crossing four time zones, I was landing at Sea-Tac just as I completed his Acknowledgements. (Seriously, I read it from one tarmac to another. East coast to West.)

The next morning, I had a Memoir class in Issaquah. Memoirist Bill Kenower, teaching. Jet-lag be damned, I made it onto an early morning ferry.

Each of us brought a few pages of work to share for critique. Bill read each student’s piece aloud as we followed along and later responded to his queries.

I have to say, my fellow students are damned good writers. (There are four of them.)

For my writing sample, I selected a chapter from my memoir that fit the criteria of “three pages long”. It didn’t matter about the humor part. They didn’t know my revised goals.

When Bill began to read my piece, I was surprised to hear—within two sentences of the beginning—chuckles. Then a few sentence along, more chuckles. They laughed periodically throughout the whole darn piece!

I shared that I honestly did not realize that this chapter was funny at all, but then Bill pointed out specifics of hilarity and understatement.

It was funny. It is funny. What a funny day!

Now, if only someone can cure my phobia of looking in mirrors. 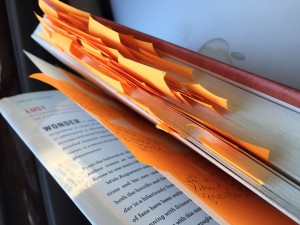