The Norman Rockwell Museum in Stockbridge had only three cars in the parking lot on this cool wintry-looking April day. I parked, knowing that I’d enjoy the luxury of having the museum almost entirely to myself.

I tried to get here on a couple of other days, but made the mistake of beginning to write early in the morning, not noticing the clock until it was past three. Too late to set out. This time I planned ahead.

The building itself is a perfectly classic white complement to the Americana style of Rockwell, its peak topped with a cupola that pours light into the space below. There are a lot of cupolas in this area of the Berkshires. Even the barns have cupolas—more than likely designed to let light into the barns during the dark sunset hours when candles and oil lamps were dangerous in barns filled with hay.

As much as I wanted to wander around outside, I crossed to the main building following the sidewalk that was the only surface empty of snow. Strong snow glare and sunglasses.

A visit begins with a brief biographical film in the basement where I sat alone,  front and center, surrounded by a collection of framed The Saturday Evening Post magazines, in a gallery full of empty chairs waiting to greet the summer crowds.

There’s a lot I didn’t know about Norman Rockwell.

I knew that Norman Rockwell painted the cover art for the countless Saturday Evening Posts that I pored over in the privacy of the screened porch at my grandparents’ lake house. A large cardboard box full. I dug deep into this box of buried treasure, pulling up one after the other on Sunday afternoons while my cousins played with their blond bitch Barbies in the upstairs bathroom. (Sorry. My doll feelings are showing.)

I knew that Norman Rockwell’s skill as an illustrator was epic. His dedication to creating charcoal sketches of the desired work, then progressing to an oil study, followed by the final painting, went far beyond mere illustration. He used local people as models for the paintings, photographing them in multiple poses to have his own stock of expressions and inspiration. Frequently, he added his own image—often playfully.

What I didn’t know was that Norman Rockwell was a natural-born illustrator with skills that surfaced at a very young age. He often interrupted his father’s story-telling so that he could sketch out what was being described.

Fortunately his parents recognized his gift and he dropped out of traditional high school to attend art school in NYC. His first job after graduation was at Boys Life, the Boy Scout magazine, at the age of seventeen. By nineteen, he was their Art Editor.

I attended a gallery talk by a talented docent who shared insight into Norman Rockwell’s creative style, his influences and especially, his symbolism.

The use of symbols to convey meaning is common in master works, in what we consider “museum art”, but illustration art has often been overlooked as lacking in this sense. Norman Rockwell was far ahead of his time in uplifting the art of the illustrator.

While many viewers may have seen only the subject matter of the Post covers, each painting had been planned with intricate attention to detail. The use of triangulation to draw the viewers eye to the message. The use of color and symbolism to project the message.

Which leads me to the dolls in some of his work.

If you’ve read some of my essays, or work-in-progress excerpts from my childhood memoir, you already know. I never liked dolls. In fact, I despised them. I didn’t know what you were supposed to do with a doll.

Sixty-something years later, I couldn’t escape the dolls, even here at The Norman Rockwell Museum. Like the snowstorm of a few days ago that carried me back to the snowy winters of my childhood, the dolls in the paintings of Norman Rockwell carried me back to the phases of my childhood where dolls were supposed to be part of a normal child’s play.

The first painting I noticed was Girl at the Mirror, from 1954, where a young girl is clearly absorbed in the self-analysis that accompanies puberty. A hairbrush, comb, and an open lipstick case are on the floor at her feet, a movie magazine in her lap, a wistful expression on her face. Her doll is posed in a position of rejection, tossed to the left of the mirror. She no longer has use for it.

Second was Freedom From Fear, one of the quartet of The Four Freedoms paintings which traveled the country raising money for the war bond effort. In Freedom From Fear, Rockwell used a doll placed on the floor at the foot of the bed to illustrate that the children being tucked into bed have freedom from fear. There’s black fabric on a chair—possibly to symbolize the blackout cloth that was used to block city lights during WWII. The father is even holding a newspaper with the headline of “bombings” and “horror”—a prop that the local newspaper printed for Rockwell to use in his layout. The docent who noted these details shared that the doll on the floor meant that the children didn’t need to cling to their dolls for security. They didn’t need a doll to comfort them.

The dolls, used as symbols of childhood shown here, are innocent. They don’t take into account the children for whom dolls represented a dark side.

As I viewed The Saturday Evening Post covers of the 50s, I saw a lot of family values and reminders of every day events from a time that celebrated the innocence and good times, post-war optimism and prosperity. I saw the hair styles, the clothing, the cars—the scenes where my own childhood took place.

And symbolism? Good writers share the artist’s use of symbolism to evoke the feelings that they are wishing to convey. I was glad to receive the reminder. 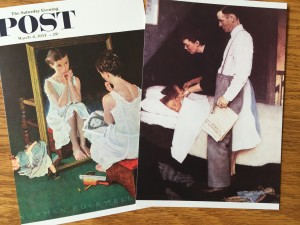 Subscribe to this blog at left. Receive the posts in your email.