It’s been less than 12 hours since arrival in Belize and, already, I’m back in the groove. Any thoughts I had of maybe going elsewhere next winter are slowly getting squashed by the synchronicity that I always experience here.

I’m thinking that I need to assemble some writing based on the experiences that I’ve had here during 10 trips spaced over the past 26 years (8 of them in the past 8 years.). I’ve been visiting here since before electricity was brought to this island. In the early days of my visits, huge generators supplied the island with its power. There was an ever-present hummm in the background. Except when they went down and the lights went out.

It never occurred to me that my Belizean experiences might have some memoir aspects to them, but after this morning’s events, I see that they have.

Here’s an example of synchronicity from last winter.

One morning in February 2015, I stepped down into a water taxi with a half dozen school children of assorted ages, all of them dressed in the public school uniform of white shirts and navy blue pants. As we pulled away from the dock, I looked at my companions and began to reflect on the various school children that I have met here over the years.

A high school boy sat quietly on the bench beside me. I turned to him and said:

“I’ve been wondering… Years ago, maybe 10 years, there was a little boy, maybe 7 or 8 years old, who used to sell jewelry outside the Capricorn restaurant up the beach. His uncle works at Capt. Morgan’s. Would you happen to know who that boy is?”

The young man turned to me and smiled.

I still get goosebumps when I remember that conversation.

We talked all the way into town re: his little sister, his brother, his parents. I asked him what he is studying. What he likes best. Updated all. Synchronicity.

Today as I bicycled into town, I met the usual assortment of golf carts and bicycles, tourists and locals. I noticed that the newly-arrived tourists, the ones without tans, were not terribly comfortably looking. Maybe it’s their first visit to a third world country. They’re ignoring the people around them.

The locals peddle along minding their own business, realizing that 99% of the tourists have zero interest in them. Here’s where I say that I am among the 1% that do have an interest in them. As fellow human beings.

I want to be perfectly clear that we are all 100% equals. I don’t engage with the locals in some kind of condescending phony-friendly, chit-chat.

I simply smile and call out “Good Morning” to everyone I meet as I pedal along. The smile and another “Good Morning” gets reflected back at me warmly. …and this day, I add “Happy New Year”.

It’s a simple premise. It’s always best to appreciate those around you. As a woman traveling alone, I naturally don’t do anything stupid. I’m aware of my surroundings at all times. I don’t travel alone after dark. At the same time, I don’t let my solo situation block me from having rich experiences. I explore. I ask questions. I don’t take anything for granted. But I’m not fear-faced. 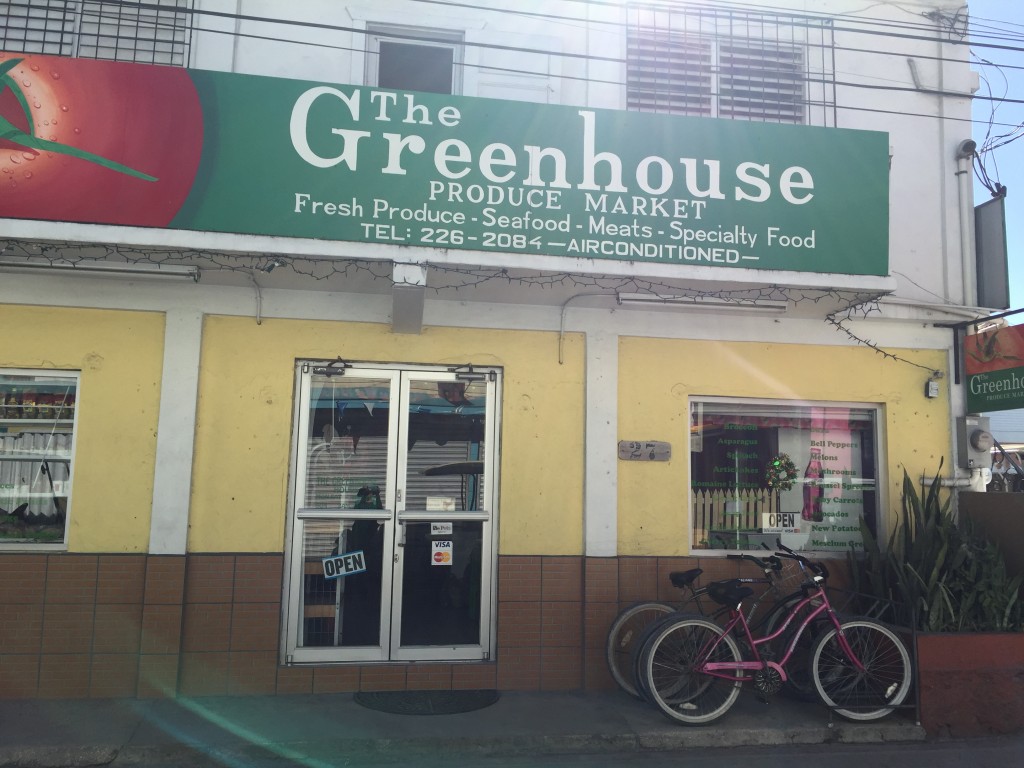 Arriving at the market:

That’s my bike out front. I was pleased to see that I was able to get everything I need to make the vegetable soup that is my daily Ayurvedic lunch, as well as the local fish that is my dinner. Sea bass, lobster. Everything  except the kale and broccoli. I’ll substitute seaweed (nori) in the meantime. The fact that you can even get kale is a very big deal. I’m glad to see that there’s a demand for it from the expats living here. The Mennonite community of about 10,000 members inland grows the vegetables supplied to the island and raises pasture-fed beef.

Since it’s my first day in the heat and I have a heavy load to balance on my handlebars, I didn’t stop to take any photos, but my eyes took in the changes and additions to town. I’ll take pictures on Thursday when the kale comes in. Normally I don’t go into town at all, but kale- that’s a good reason.

As I crossed over the one bridge on the island and left town pedaling north, I passed a boy, maybe 11 or 12 years old, on a bicycle. I smiled “Good morning” and “Happy New Year”. He responded the same, and then a little later, I heard his bicycle coming up behind me so I called out to him with a smile over my shoulder-
“Wanna race?”

Well, that was all he needed to hear. We didn’t race, of course, but he pulled up alongside of me and the two of us, the boy and the lady, bicycled side by side for a couple of miles, talking about the day to day like two old friends.

His name is Jessum. He lives not far from where I’m staying. His mother owns a local hotel there. “The pink one.”

Was I here for the fireworks?

“No, I just arrived yesterday.”

The fireworks are fairly new. Now there are enough prosperous businesses to donate the cost.

I can tell that he’s a bright young man who will do well. He has the natural curiosity that one needs to thrive and succeed.

A couple miles later, he pulled off the road, saying “Maybe I’ll see you… on the road.”

After that, I was so engrossed in thoughts about Belize and how it has become part of my life, that I totally missed the turn for the place where I’m staying! That’s pretty incredible- considering the fact that I was toting a heavy load and it is Hot outside and my First Day in the heat. Normally I would be keen to get back.

Once I realized what I had done, I stopped, came about, and back-tracked the half-mile that I had overshot my destination. I’m staying at Captain Morgan’s Retreat, a Belizean-style resort with 1000′ feet of sandy shoreline. 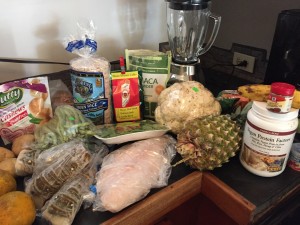 I unpacked and made my breakfast: banana pineapple carrot protein smoothie with cinnamon and maca powder. I didn’t have 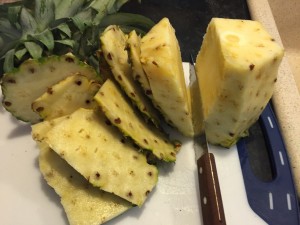 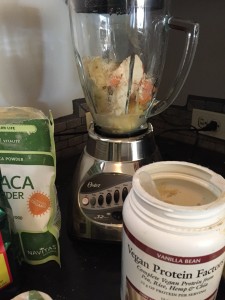 any ice (yet) so I put it in the freezer in two glasses. By the time I got to the second one, I discovered that I had inadvertently created an awesome banana pineapple carrot popsicle!

Tonight I’m cooking sea bass. Have never cooked (nor eaten!) sea bass, but I think almonds and cashews are going to play a role. Stay tuned. 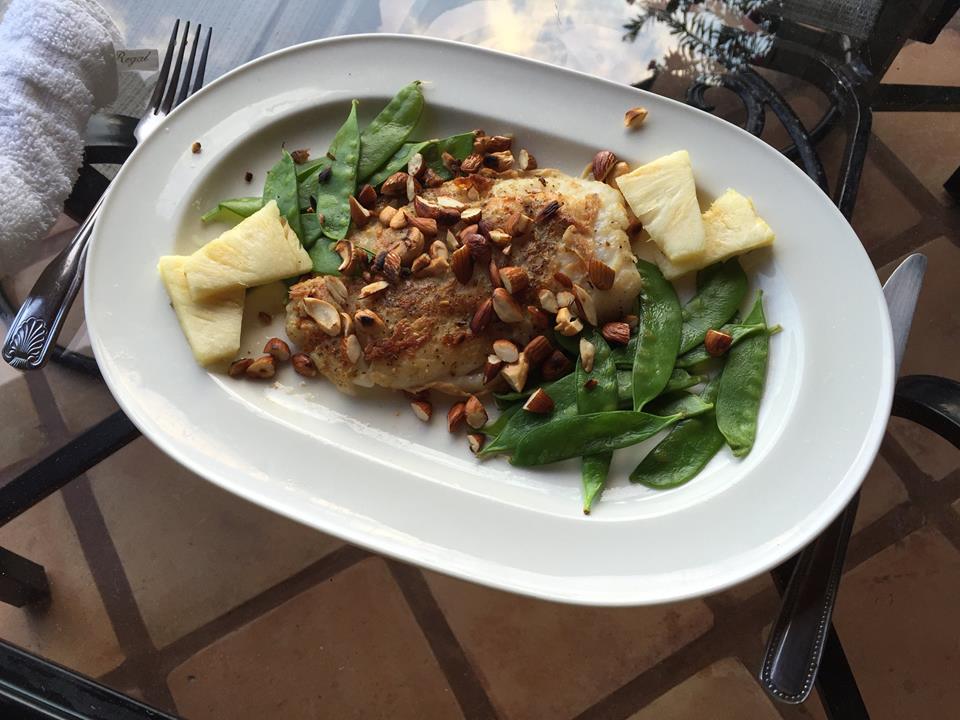