In 1970, I was an undergraduate student at UMASS Amherst trying to come up with a suitable subject for a lithography printmaking assignment. I wasn’t terribly inspired in those days. I had a Merriam-Webster’s Dictionary that had been a graduation gift from my local hometown newspaper, where I was a high school journalist. I flipped the dictionary open at random that day and saw a tree/shrub called “mangrove.” 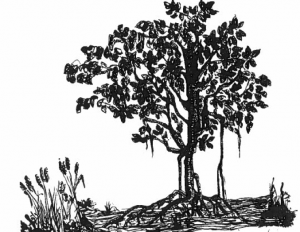 I had never heard of this species but I’d always had an interest in plants. An illustration of the mangrove with its small leaves and tangled roots accompanied the definition. I sketched it on drawing paper and the following day, I copied my sketch onto the limestone and printed it. It’s the only print that I still have from those days. The black and white litho-crayon sketch hangs in the stairwell of our home in coastal Washington.

In 1990, our family was in a open motorboat at low tide, navigating  the shallows off the Belizean coast enroute to the entrance of the Macal River, then traveling upriver to meet our guide to the Mayan ruins at Altun Ha. At one point, we grounded on the shoals. Our boat pilot hopped out to lessen the weight in the boat and braced himself in the soft sand to push off and free us. We continued to the Macal and entered the mangrove swamps, stopping once to view a Fer-de-Lance snoozing in camouflage.

How does a timid college student in a cold North American climate select a subject matter that will turn up twenty years later and become a recurring botanical theme in the travels of a middle-aged woman? Synchronicity.

In 2016, as Maya Island Flight 2181 made the fifteen minutes crossing from Belize City to San Pedro, I took a few photos from my seat behind the pilot. This image shows the dense forests of mangroves that line the Belizean coast and many of its islands. The salt-tolerant trees with leggy, exposed roots are useful in preventing erosion and offer a certain amount of protection from storm surge during hurricanes.

The mangroves are more important than that to me. They’re a touchstone. Synchronicity.

After a day filled with bicycling, cooking, writing and even a swim off the dock, I carried my Eno DoubleNest Hammock to the seawall. Found two cooperative palm trees. That is, two palm trees aligned so that I would receive the delicious breeze off the water, yet block the unforgiving rays of the Central American sun, and spaced just right for the hammock length and its sturdy carabinered straps.

Took me just 5 or 6 minutes to set-up. Tucked in with my Nook, thinking that this is crazy tight for two persons. It would have to be two very intimate persons. Or two very skinny persons. Or two persons who wouldn’t mind spooning all night long with no way to change position. I suppose you could lie with heads are opposite ends, but the images online all show happy couples cuddling in its cocoon shape.

Lounging in the Eno DoubleNest alone, the hammock completely encapsulated me. I wiggled around to Suggested Position 2, which is to lie crosswise. Then I lay back and prepared to read, but I became totally distracted as I lifted my eyes to the sky.

A row of perfectly painted clouds was stretched out before me hugging the eastern horizon, just above the fringe of waves crashing on the coral reef. The clouds were reflecting the color of the water, which at this time of day was the precise color of tender blue bruises. The tops of the clouds were shaded pink. Romantic pinks.  Thomas Cole landscape pinks. Hudson River Valley pinks.

As the sun inched downward to kiss the tops of the palm trees in the west, the clouds became more and more blue, less and less pink. The scene was so beautiful, it almost hurt.

Actually, it did hurt. All this beauty and no one to share it with. It hurt.

I saw a man photographing the scene from the end of a dock. Two pelicans sat on two wooden pilings, totally ignoring the incredible scene, which was destined to be viewed on a hundred Instagram accounts that night.

Two persons came by in a kayak, enjoying the calmer water at this time of day, their paddling totally synchronized like two lovers who have been enmeshed in each others’ moves for the better part of a lifetime.

Finally the clouds were totally blue. The palm trees in the west transitioned to a black silhouette as a water taxi zipped by with its running lights on.

I returned to my Nook and the 2013 Best American Essays that I had downloaded from the library.

Cheryl, being Cheryl, didn’t tell me that she had essays in those volumes, and she didn’t share that she had been invited to edit the latest (at that time) volume of the Best American Essays. Always modest and low-key, always concerned more about you, Cheryl Strayed is a woman who personifies the highest order of best intentions- not to be confused with the road to hell that’s paved with good intentions.

Finally comfortable in my hammock, I clicked to the Introduction from the Editor:

“When I teach writing I tell my students that the invisible, unwritten last line of every essay should be and nothing was ever the same again. By which I mean the reader should feel the ground shift, if only for a little bit, when he or she comes to the end of the essay. Also, there should be something at stake in the writing of it. Or, better yet, everything.”

As I read this, something suddenly clicked. I read it again.

I’ve never had a course in essay-writing. It seems that the general interest in writing instruction prevails upon Fiction and Non, mostly in book length. Short form is usually relegated to Poetry.

I read on. Everything the editor had written was so on target with what I needed to hear. By the end of the introduction, I was pretty much convinced that essays are meant to play a significant role in my writing.

Then I saw the signature line of the editor. Cheryl Strayed.