Except when it doesn’t. But hang in there—this isn’t a blog about pain and misery. It’s about life’s surprises.

When I was diagnosed with breast cancer in December 2017, I actually wasn’t too freaked out. My first response to my primary care physician, who was delivering the news from the other side of the country, was “OK. What do I do to fix this?”

We had the conversation about oncologists, surgeons, reconstruction and hospitals. A few days later, I returned home to Washington state and began the interviews, appointments, and education process. A lot to learn! A lot to take in, and more importantly, a lot to decide. 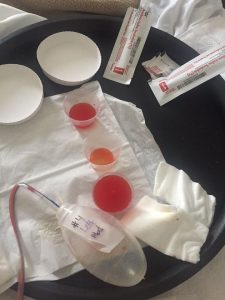 Fast forward to today. My first surgery is eight weeks behind me.

Where did the time go? It’s almost as if it never happened. Or maybe it happened to someone else. I did, very often, feel as though I was watching someone else’s life. Except for the long voids of empty space in time. The long period of not writing. All the blog posts that I never finished. The long period of doubts and fears and alone-ness (not loneliness).

My point is: when you’re in this situation, the one thing you realize is that you damn well need to get rid of anything that isn’t working because you only have this one life to live (that I know of in this current space in time) and you’d better make this current life the Best it can be.

Then, just when I could do the simple things that were forbidden for weeks—rolling onto my stomach in bed, enjoying a hot restorative bath, easing into a hot tub—doubts crept in.

Yesterday I was seriously— and I do mean SERIOUSLY—considering leaving this writing stuff to the next generation. Maybe, I thought, maybe I was meant to have more time for walking on the beach or binging Netflix. I’ve been reading Ann Patchett’s The Getaway Car: A Practical Memoir about Writing and Life, and I’m watching other parts of my life teetering on a seesaw each day.

I hadn’t re-read my manuscript since pre-diagnosis and yesterday was the day I was going to put aside the delays of the past three months, open Scrivener and see what was there. It was HARD. I did everything I could to avoid it, including walking 7,000 steps in the cold. (I’m on the other side of the country again.)

But then, after nervously consuming multiple items that were beyond a reasonable person’s calorie count for the day, I did it.

That is, I opened Scrivener and re-read Chapter One.

I found a couple of words that needed replacing because they echoed each other’s sounds in a non-complementary manner. I re-shaped the first two sentences to remove any triteness and draw the reader in. I was careful not to change anything just for the sake of changing it. Then, I renamed the chapter to reflect more depth of the content: From a blah “My First Memory” to a significant “A Fierce First Memory”.  In short, this three months absence from writing was beneficial. I’m back in the saddle.

Fierceness is my strength. Some people might call it stubborness, but, no, I say that it is fierceness. Tenacity. It’s what has had my back throughout these sixty-seven plus years. I can see now that “A Fierce First Memory” at age three is all about everything that would—and will—keep me together for the rest of my life.

I fell asleep feeling pretty good. Feeling as though I’m on the right track and able to assess the memoir content from a reader’s point of view.

This morning, if any doubts were lingering, I was surprised to greet three reinforcements from the Universe:

I accepted this trifecta of Polish-ness as a positive message because I rarely come in contact with much that touches on my heritage, so I am happy to acknowledge this as a happy accident of communications.

Seasonal Blues. Eventually It All does Come Together.