In my youth, Thanksgiving was always a rock solid holiday in the United States. Norman Rockwell solid.

Family and friends sitting around a table with a roasted symbol of plenty in the middle. A home-grown turkey so big it filled the oven like one of those Japanese melons grown in boxes so they’ll be harvested square and stackable. Began roasting at 5 AM, vegetables simmering by 10, mashing the potatoes at noon.

As predictable as pumpkin pie.

Tepid hugs from ancient relatives greeting you at the door to see how you’ve grown. Young boys in white shirts, half untucked and soon to be smudged with lawn. Me, sitting at the empty dinner table, talking to no one. No expectations.

Multiple generations passing the cranberry sauce, eyeing each other up with unspoken judgments. A little bickering amongst the kids. He hit me first. The women, clad in calico aprons, doing the dishes after dinner. The men, buttoned up in hand-knit cardigans, tapping their cigarettes into beanbag ashtrays in the living room. Me, sitting at the empty dinner table, talking to no one. No expectations.

The older folks shaking their heads over Beatle haircuts. Football games on the TV. Not too much to complain about. Yet.

In ’65, Bob Dylan stood before us on a stage in Worcester, Massachusetts and sang “The Times They Are A’ Changin’.,” and the next time the curtains parted, the folk icon had gone electric. Tradition be damned.

Polarity in the country grew slowly and soon there was revolution in the air. Easy Rider hit the theaters. Janis Joplin played our college homecoming concert and I smelled marijuana drifting in the air for the first time.

A few days before Thanksgiving in ’69, we hitchhiked to Washington DC to join the Moratorium to End the Vietnam War. The air was crisp, the sky was blue, and as far as the eye could see, the crowd of students was elbow to elbow. I never got close enough to hear the speeches.

That night I slept on a cushioned window seat in a kind woman’s home. She served us lentil stew from a recipe in the New York Times cookbook.

I remember the kitchen.

I remember the kindness of strangers.

That Thanksgiving, my family didn’t discuss the Moratorium March. We didn’t even discuss the War. My father ruled the conversation with a cold, tight fist. Nixon was President.

We students thought we were liberal but most of us weren’t even close. I can’t pretend to have been an activist. I was caught up in a survival loop at home. My non-conformist ways began with baby steps. The first time I went without a bra, my mother cried. She needn’t have been so upset. My boyish chest wasn’t going to attract much attention.

There were many other causes still under the radar. At the time, I didn’t even recognize that my beloved godfather and his best friend were gay. It wasn’t until Uncle Joe was in his eighties that I was able to write “that letter” expressing condolences over the passing of his lifelong partner.

Our own children were growing up, and we thought things were going along pretty well but— things have changed.

Now we are the older generation.

My father’s been dead a few years. My mother lives with dementia. I don’t even know if she’s aware there was an election.

I’m going to visit her across the country, but there won’t be a Thanksgiving dinner this year. Everyone’s gone and the house where we sat around the turkey in our tie-dyed t-shirts and peace symbols stands empty.

I’ll still be sitting at a table. Maybe making a jigsaw puzzle or playing dominoes, my mother’s two favorite activities. No expectations.

We never know what’s coming in this life.

Our country is in a state of radical change once again. Surely peace symbol bumper stickers will become popular again. We need some kind of symbol—some hope that it’s going to be alright.

I hope your Thanksgiving is peaceful, and that you’re able to find a place of calm in the coming days.

“Come senators, congressmen
Please heed the call
Don’t stand in the doorway
Don’t block up the hall
For he that gets hurt
Will be he who has stalled
There’s a battle outside ragin’
It’ll soon shake your windows
And rattle your walls
For the times they are a-changin’.” 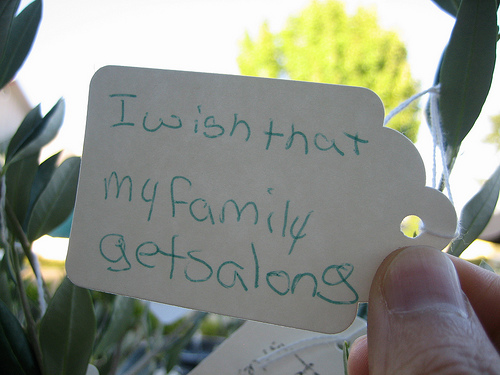