International Women’s Day was originally International Women’s Work Day. So I mused about whether I should write about feminism in the workplace, or the role of women in the world, or simply, as smart and outspoken writer #MaryKarr posted this morning: “hope folks wind up grateful for unpaid butt wiping & food prep & the oft-underpaid female.”

“Feminism and basic equality for women” 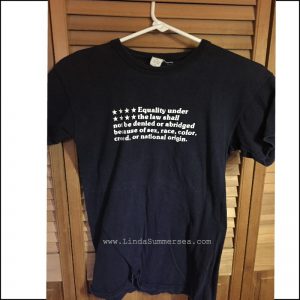 That’s what I can relate to most, as a woman who came of age during the Betty Friedan, Gloria Steinem, Shirley Chisholm, Roe vs. Wade days.

My 1972 E.R.A. t-shirt still hangs in my closet. “Equality of rights under the law shall not be denied or abridged by the United States or by any State on account of sex.”

Not to quibble with our accomplishment in gaining the Equal Rights Amendment, but as Ruth Bader Ginsberg has said:

The Equal Rights Amendment needs to be added to the Constitution, so that “no one” can take it away. Let’s not let anyone get any ideas.

Yes, Sojourner Truth, the flappers like my grandmother who got the 19th amendment passed, and Rosie the Riveter, all came first.

As little girls in the 50s, some of us were feeling the stirrings of simple injustices.

“I was clearly a young feminist, even though the word ‘feminist’ was not in my vocabulary. As an elementary student, I always questioned—only in my thoughts, mind you—why the boys were the only ones who got to carry the dark green metal wastebaskets full of trash out to the incinerator on the edge of our schoolyard at 2:45, shortly before the first bell rang the close of our school day.

Our school had a fearsome brick incinerator. A tall smoke stack reached skyward from its concrete top, spreading the remains of our rejected schoolwork high over the town, just like the smoke that rose over the Vatican marking the election of Pope John XXIII after Pius XII died.

I envisioned the representative boys from all of the classrooms, gathering there in the afternoon like a secret society, punching and fooling around as they waited their turn to feed the monster. After emptying their wastebaskets, the boys retraced their steps. They knew precisely how much time they could waste while dawdling in the halls on the return trip, and yet still arrive in time to grab their school bags and lunch boxes and line up with the rest of us.

Even as a Kindergartner, I noticed that only boys got to carry the wooden milk cases from the front hall, where the milkman delivered them, to our classroom where more boys unpacked the milk bottles and stood them on the radiators to warm.

The issue of patrol boys annoyed me even more. I may have been young, but I knew damn well that I was as qualified to usher students across a street as any badged and belted bully boy at St. Mary’s.

Of course, the injustice went both ways. Occasionally someone would misbehave, and guess what? It was always a boy who got his bottom or hand whacked with the stern oak pointer of retribution. Each class had a couple of boys who were marked as troublemakers and were flogged constantly until they escaped to high school.

In eight grade Civics class, we learned there were such things are “congressional pages” who carried messages for the members of Congress in Washington and did other errands. This appealed to me. I looked up the requirements. I only needed a letter of recommendation from my teacher to a state Senator or Representative to accompany my application. Then I found out that girls were not allowed. I was furious. As I tallied the limitations of my sex, I saw that boys clearly had an unfair advantage.

At home, it was no different. The domestic chores went to us girls. I was assigned vacuum duty as soon as I was strong enough to wield a Hoover. Robby never had to lift so much as a duster.

After our baby brother was born and we moved from the farm to our new house on the hill, the chore scales at our house tipped even more in favor of Robby, who was now ten years old. He no longer had to feed the pigs. His chores were reduced to taking out the trash and feeding the dog, and then he went off with his .22 until suppertime.

My sister and I had to vacuum, take our baby brother for stroller rides, change his diapers, put away his toys, prepare his baby bottles, entertain him, put him to bed. In addition that that, I had to cook dinner four nights a week, and do the dishes.

Mummy worked those four nights a week. She passed me the baby as I entered the front door after school and skipped merrily down the steps to drive away in her Jeep. No instructions and no looking back.”

~The Girl with the Black and Blue Doll, Linda Summersea

Later, as a young teacher, I finally was able to afford the orthodontic braces that Daddy said I didn’t need. Imagine my shock when the orthodontist’s office informed me that the procedure would not begin until I brought my new husband’s signature to take responsibility for the payments! In 1974!

If you know me, you already know that I did not bring them my husband’s signature, and I gave them a good talking-to regarding the need to change the financial arrangement requirements on their forms.

Today, thankfully, girls can become congressional pages. They can even grow up to run for President of the United States—although we’re far behind many other countries in acknowledging women as world leaders.

Girls are no longer assumed to be the goody-two-shoes, and boys no longer have to take the blame for every wrong deed.