I can’t pretend to know what works best for growing and healing. I’ve definitely floundered around during my lifetime, trying to climb out of that hole. I still miss my foothold now and then and slide down to the bottom.

What I’ve learned is that children who grow up in sheltered circumstances while experiencing questionable- OK- bad– parenting find themselves in a scary place most of the time, even though they often- like me- think that the other kids at school are experiencing the same kind of childhood.

Like me- they endure emotional pain, confusion and fear. Their self-concept is warped. When they look in the mirror, they don’t see a realistic view of themselves the way happy, healthy children do.

They look to their dysfunctional parents for the cues that end up reinforcing negative statements made carelessly in their presence.

The fear causes sadness and tears. A lot of tears. Perpetually swollen eyelids and bloodshot eyes. Lots of lying on the bed facing the wall in a fetal position.

But no one notices. In those days, most people minded their own business.

In my case, every now and then, I’d be allowed to visit another child’s home after school. OK. Three times in twelve years. All three times, I came home with feedback that meant I couldn’t return to those homes ever again.

1. My friend’s father cooked supper for us. I’ll never forget him. He made French toast and he laughed. He laughed a lot! Like an out of season Santa Claus. He was slightly overweight and jolly and fun and told “knock knock” jokes while he wielded the spatula at their electric stove. My own father wouldn’t even put a slice of bread in the toaster. If we had a toaster. We didn’t have a toaster.

2. Another girlfriend had a piano in her living room. She sat down and played some little ditty effortlessly and I was enthralled with the music that floated up, its melodious notes surrounding us in her colonial wallpapered living room with the hardwood floors, the oriental rugs and the formal sofa where her grey-haired grandmother sat smiling approvingly with an afghan over her lap.

3. In ninth grade, I actually got to sleep over at a third girlfriend’s home. It was a red brick ranch house. I remember the too bright fluorescent ceiling lights in their sunny yellow kitchen, where my friend was asking her mother about growing up. She spoke of coming to school one day and suddenly all the girls in the lavatory were talking about this cute boy, and girls suddenly had crushes. Shyness was developing along with budding breasts and curiosity about the opposite sex. Her mother responded so sensitively. I can remember her exact words. “You’re growing up now. There are lots of changes happening- all good things.”  All good things! I rejoiced at that. It was news that I was so ready for.

These three visits caused me to return home full of excitement and anticipation. At the supper table on the days following these events, I must have shared too much and spoken too highly of my experiences on the other side of the fence.

A father wearing a gingham apron and telling “knock knock” jokes! A grandmother and a piano! A mother who answered her daughter’s questions. It’s unfortunate that I was so dumbstruck that I didn’t think to get answers to any questions of my own.

My mother’s rubber-stamped response to all of my questions was “I don’t know.”

What’s a “reasonable facsimile”? from the back of a box of Corn Flakes. “I don’t know.”

For an adult, my mother didn’t know anything.  She never answered a single question in all the years that I was under her “care.”

The piano was one of the most disappointing revelations because I had always wanted to play piano, ever since Sister Remigius played and sang On the Good Ship Lollypop in kindergarten. Seeing the piano in that living room was the first time I realized that pianos could actually exist in private homes. I learned that Judy took piano lessons and asked if I could too. Mummy said “no.” Absolutely not. She said it was only because I wanted to copycat my friend.

It made me sad when I realized that my home life was so different. I returned to my depressed state. When puberty kicked in, so did my anger. I was rebellious and noisy in my frustration at home.

We were still isolated, so I was still lonely. Even in high school when I got my driver’s license and was able to drive to a school basketball game with my sister, I was still too shy to develop any long-lasting friendships. Finally I comprehended the fact that nothing would ever change  and I silently accepted my fate. Like most of the other children in situations like mine, I survived. I grew up and I even found some semblance of joy.

When I was 64- sixty-four!-  I learned that my mother not only took piano lessons, but that she loved playing piano, and her two sisters also took piano lessons. This bit of information slipped out as Mother was free-falling through the decades in her dementia-affected memories. She didn’t even notice when I frowned as she described how they would gather along the keyboard, three little sisters playing piano together. 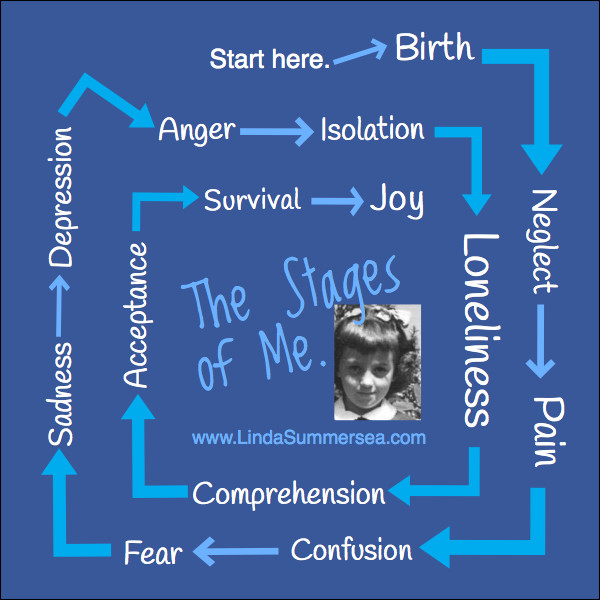