It has not been an easy month.

I noticed this morning that I have seventeen unfinished drafts of blog posts. Four of them were written in the last thirty days. There they sit, waiting for another day.

On the bright side, I also noticed that when I least expect it, I find a relevant moment in my present life that takes me back to my past.

This week that moment came in the form of recurring scenes in the film Paterson.

Paterson is about a bus driver named Paterson, who happens to drive his bus in Paterson NJ. He’s also a poet, and we watch him repeat his daily pattern over and over with subtle differences.

IMDb describes the film as “A quiet observation of the triumphs and defeats of daily life, along with the poetry evident in its smallest details”.

I can’t imagine a better description. Paterson leads, I think, a zen existence. Even though Paterson’s daily life takes place in the present day, you find yourself easing out of the digital age to a quieter rhythm of existence. Your pulse slows.

This is not to say that the film is slow, although, yes, a moviegoer used to high flash action will certainly be fidgeting. In fact, many people will find it slow, but its strength is in that quiet rhythm, and that quiet rhythm might be the reason for its many nominations and awards*.

So—what was it about Paterson that took me back? 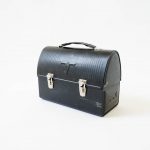 Paterson carried a lunch box to work every day that was exactly like the black lunch box with the thermos in the cover that my father carried to the factory, day after day, month after month, year after year.

It was the same lunch box that millions of other factory workers in the 50s carried to work. Even Ralph Kramden, the bus driver played by Jackie Gleason in the iconic television series The Honeymooners, carried the same lunch box.

As I watched Paterson sitting on a park bench with his open, and neatly packed, lunch box beside him, it made me realize that I never—throughout my entire childhood at home—ever saw the contents of the lunch box that sat on the counter next to mine each morning before we set out for school and work.

I knew that every day of my grammar school years, my own lunch box held a peanut butter and grape jelly sandwich on squishy white not-Wonder bread, a thermos of warm Kool-aid, and—if I was lucky—two or three small oatmeal cookies. Sometimes I found a fleshy single slice bologna sandwich, but after two or three bites that stuck to the roof of my mouth, I dropped it in the wastebasket along with its waxed paper wrapping.

During the writing of my memoir, I spent the past three years mentally reviewing as much of my childhood as I could muster up, so I had to laugh this week at the lunch box question.

What did Daddy eat for lunch?

I haven’t the fainted idea.

Whatever it was, he must have found it acceptable because I don’t remember him complaining about it—and he complained about a lot.

Every day he returned the lunch box to its place next to the sink’s drainboard and every morning he picked it up before setting out.

It’s odd that in replaying my childhood like a staticky 8mm film on the screen inside my head, I never once saw The Lunch Box.

What else have I missed?

Paterson ends with an event that reinforced another part of my present. No spoilers here, but the meaning—I believe—is that a writer has to write. There is no other choice.