Friday was a brilliant day at the water’s edge on Puget Sound. Sparkling water, blue skies with cotton candy clouds.

A contagious atmosphere of summer celebration was in the air as toddlers splashed at the edge of the icy water and a handful of sailboats marked the horizon.

A busload of school kids was picnicking with parent chaperones while their teachers took a break from counting down to the last day of school. Lovers nuzzled on park benches, new mothers in yoga pants and hoodies pushed strollers while a slight breeze off the ocean lifted and swirled their hair.

My dog Lily and I walked along the shore enjoying the sun at our backs.

A 30ish couple with their baby girl and a black Border Collie was stretched out on a patch of lush green grass just ahead of us, watching our approach.

The young woman called out to me. Let’s call her “Emmalene”. It was something like that. The events that followed made me forget her name.

Emmalene explained that today was the last day of her dog’s life. He was going to be euthanized tomorrow, and would I allow Lily to play with him? She said that she was trying to give Blackie a Very Best Last Day.

We all looked at Blackie and Lily. The Border Collie and the Golden Retriever were straining at their leashes, tails wagging wildly and trying to get near enough for sniffing. How could I refuse? Why would I even want to refuse? This was a serendipitous meeting. I had just helped a friend navigate through the euthanasia of her cat three weeks earlier.

The dogs greeted each other happily and stood very much at ease in each other’s presence. Honestly I’d never before seen anything quite like this extremely pacific exchange between my dog and another. I knelt in the grass and began to massage Blackie as we spoke, starting behind his ears, then neck, shoulders, and back, reverse and repeat. I could feel lumps all over his body, but he was relaxed at my touch.

Emmalene told me that Blackie had been having bad days when he vomits all his food and can’t get around. He also had good days like today where he was energetic, but the bad days were increasing.

“He’s old. 15 years. Most Border Collies live to be 12 or 13. He’s covered with lumps and some days he can barely function. Today he’s happy and alert, but the vet said it’s all about quality of life at this point so we had to decide… but we keep second-guessing ourselves. It’s so hard to say good-bye yet we don’t want him to suffer.”

As I massaged Blackie and spoke gently to him about his beautiful day, I shared that my friend’s cat was actually her second cat to develop pancreatic cancer. Her first cat developed it two years ago, and she approved all possible treatments. Chemo. Painkillers. The max. The poor cat suffered through it all until nothing more could be done. Sadly, her second cat was diagnosed with the very same type of extremely aggressive cancer.

This time, my friend decided—and the veterinary oncologist agreed—that quality of life needed to be foremost. Sometimes humans do everything to keep their pets alive when it’s not to the benefit of the pet’s life. My friend made the difficult decision to euthanize since there was no chance that treatment would do anything other than delay the end for a few weeks. Just because science has the ability to prolong life doesn’t necessarily make it right.

I’m certainly not an expert but I am a dog owner so I did my best to engage Emmalene and her husband in a conversation of assurance. I understand how difficult it is to say good-bye to a beloved pet that is such a dear member of the family.

I said, “You can always remember that you’ve given Blackie his very best life. 15 wonderful years. From what I understand, dogs don’t know Yesterday or Tomorrow. They only know Today. And now, Today, you’re giving him a Best Possible Beautiful Last Day.

Look at how happy he is! The two dogs are snuggling and he’s lying in the grass and enjoying the warmth of the sun.”

Emmalene said that some people with dogs had actually rejected her request that day, and it made her feel very badly about the situation. One woman even went so far as to tell her that her dog looked healthy!

Lily and I continued on with our walk and when we returned on our way to depart, I stopped and knelt at Blackie’s side one more time, ruffling his coat and massaging him again. It was hard to leave…

Finally, as they looked on, I held his face and spoke softly. “Good-bye, Sweetie. You’ve had a wonderful life. Today, I want you to enjoy this wonderful day. And tomorrow, I want you to have a smooth passage…”

Then Emmalene thanked me for what I had shared and told me that our visit had been meaningful to them.

Lily and I proceeded to the parking lot. Lily jumped into the back seat and settled down with her head between her paws, tired, eyes closed. I shut the door and resolutely took my position behind the wheel. I cried quietly for dear Blackie for a few minutes, then drove away through an old growth forest that spoke to me of the worth of a life well lived that pulses within us all. 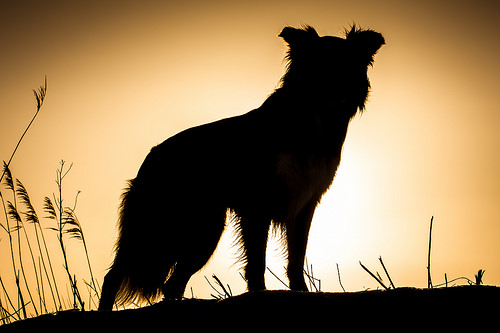