When I moved to the Pacific Northwest last fall, I was unfamiliar with our King County noxious weeds, a group of plants quite different from the heat-loving weeds of the Ozarks from whence I traveled. As I became busy with the details of moving in, getting settled, and getting my life back on track, I ignored the weeds growing in our perennial beds.

At first they were mere seedlings and I told myself that there was plenty of time to deal with them later. The brown soil boldly bared itself all around them. The weeds were sparse and spindly. But before I knew it, these foreign weeds were stretching wide and tall and deep, gaining a firm foothold in the garden where they enjoyed both sun and shade and reveled in the moist soil beneath the pendulous branches of the blossoming weeping cherry tree and her pink sisters.

Nor did these weeds have any hesitation in pushing up amongst the roses and peonies. No problem at all with marching en masse along the hedges of lavender! And soon—

I found them towering over the new spring growth of hybrid lily stalks- stalks that didn’t know what hit them as the weeds pushed through their fragile fringe of bright green.

One day, on returning from yoga class, I observed that in my absence the tallest weeds had not only formed buds, but now they were also blossoming. I knew that from blossoms there would soon be seeds and briefly panicked as I became determined to set things right in the garden. Immediately. Posthaste.

This would be a good opportunity for me to experience a much-needed grounding of my spirit as well. Crawling around in the soil on my hands and knees has always been an uplifting, pleasurable act.

I would allow Samu— the act of mindfulness in practical, physical work— to take precedence. A weed-free garden would be the secondary benefit.

I slid open the rust-edged doors of the garden shed to retrieve my tools. The doors objected with metallic shrieks cursing the light that entered their darkness. I hauled out the wheelbarrow, which by now, was leaning to the left as much as I.

I was dressed to kill in my faded garden hat, long-sleeved denim shirt and blue jeans, as I tossed my deerskin gloves, my padded kneeler and a three-pronged digger into the wheelbarrow.

I decided that I would realize feelings of accomplishment more quickly if I started where the weeds were thickest and tallest. And so it went.

Repeat several times, and crawl forward with the kneeler. The rhythm of Zen was soothing. Birds aloft in the Douglas firs gossiped quietly. They were not surprised to see me on my knees.

After about twenty such motions, a brown swath of soil was visible. Eddie, my orange tabby cat, joined me to see if I might be stirring up any excitement—perhaps a mole or two. None that I could hear.

After fifty such motions, I couldn’t help but notice the beauty of the plants in the wheelbarrow. Dead or alive, they had delicate blossoms and lovely arrowhead leaves.

As I continued, I questioned: who decided the taxonomy of these plants?

What made Herb Robert (Geranium robertianum) and Garlic Mustard (Alliaria petiolata) such villains? One woman’s geranium is pot-worthy—another to be pulled. One man’s garlic is fit for salad—another for the compost.

Stinging Nettles, I can understand. In spite of long sleeves and deerskin gloves, I accidentally pulled one specimen and it briefly touched my bare wrist—no more than a second. 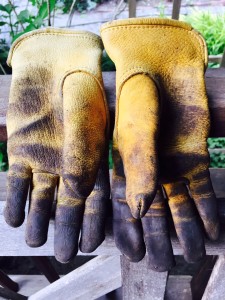 not respect a plant that causes welts to rise on your skin along with tingling and stinging sensations within two second of contact? …in addition to a tingling that begins anew twelve hours later when the antihistamine has worn off? Admittedly, not a totally unpleasant sensation once we embrace the amazingness of it.

Purple loosestrife, agreed, is another plant worthy of “weed”. But foxglove and scotch broom? Are we so intolerant of their personalities?

Of course, I know the answer to my questions. It’s never a good thing when a plant is so strong that it dominates and destroys the rest of its peers.

As I took a breather in the shade with a glass of water, I considered the same of people. How do we carry out our lives? Are we dominating? Or tender as a daisy? Do we act in such a way that causes us to be scorned or beloved? Are we weeds or flowers? 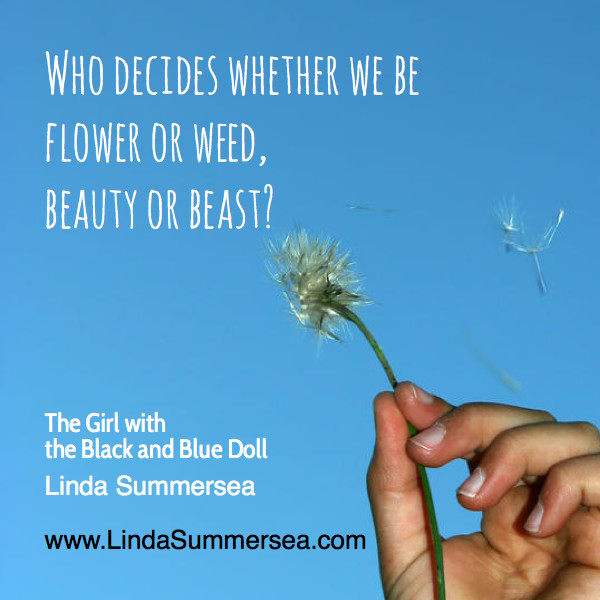