Writing a memoir isn’t for sissies.

Let me rephrase that. Writing a memoir is for hard core masochists- for those who truly enjoy pain- because, for the most part, that’s what you’re going to experience as you struggle with what to tell, what to hold back, and how the whole fits together.

I was just about to move the weekend’s Wall Street Journals to the recycle bin when I peeled open the Review section one more time, looking for something to accompany my vegetable soup.

Sure enough. Somehow I missed the interview with Mary Karr (The Liars Club), whose The Art of Memoir is going to be released on September 15.

Karr: “It’s cathartic, but the purpose of it (the memoir) is not your catharsis. You’re publishing it to create an emotional experience in another human being, and for me, unless another human being reads it and has that feeling, there’s no point.”

Mmm. Yes. Agreed. I do know that we’re always told to never admit that we have written our memoir as a means of healing or catharsis. Agents and publishers don’t want to hear that. Everyone’s life is fucked up, everyone’s family is dysfunctional, and yours is no better or worse. It’s not all about you.

During the first draft, you may write the memoir as a catharsis—but don’t tell anyone that’s what you’re doing—even if it makes you feel better.

After the first draft, if you truly enjoy language, as I do, you lose yourself in the creation of evocative sentences. You want the reader to touch and taste and smell the places you’ve been. To hear and see it all from the most degrading statements that were made to you, to your near death experience, to the survival tactics that you employed as a child.

In this process, you’ll hopefully create a work that the reader will be able to experience on such a level that they almost walk in your footprints and relive your reality as their own.

Karr says that her new book is a guide to “navigating life’s events, first psychologically and then on the page.”

“Success in memoir writing,” she says, “involves a psychological self-awareness of how you changed over time.” Karr herself is the child of two alcoholic parents. Her mother tried to kill her with a butcher knife when she was eight years old. Serious stuff.

Taking that into consideration, I believe that, during the writing, the unspoken catharsis becomes your raison d’être. If you can relive your past, get it on paper and survive the stress of it, your catharsis will be worth it. Even if you come through the first draft like the head-spinning, projectile vomiting Regan of the The Exorcist. Sometimes, it does feel that difficult. 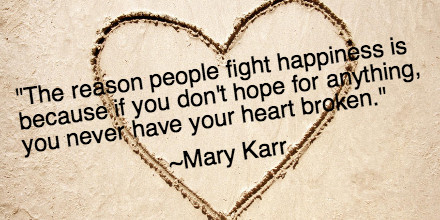