I’ve been sitting here for 30 minutes, trying to find the words to begin. I’ve decided to share a radio script I wrote and recorded earlier this year for the April 30th, 2021 commemoration of 26 years since the end of the Vietnam War.

I’ve also included links to the songs I selected to play between paragraphs during the Vietnam radio program. Music was a soldier’s connection with home, and hopefully, it offered some relief.

A Vietnam Story / A Vietnam Playlist

My husband spends most of his waking hours watching television upstairs. I remain below. It’s true I’ve never mentioned his existence before today. But it’s finally time to peel the onion and I get goosebumps just thinking about it.

This account could be any soldier’s story, but it happens to be my husband’s story, pieced together from the bits and pieces he has shared with me.

“For What It’s Worth,” Buffalo Springfield

On November 15, 1969, three years before we met, I was hitchhiking from Massachusetts to Washington D.C. to march in the Moratorium against the Vietnam War. At the time, he was in Basic Training at Fort Dix, New Jersey, assembling and dissembling his M16 on his bunk. Fort Polk, LA was next. For AIT. Advanced Infantry Training. It had its own simulated Vietnam village called Tiger Land, 3 or 4 acres where a Vietnam-bound soldier could experience foxholes, bamboo stake defenses, watch duty, tunnels, and booby traps.

“The War Drags On,” Donovan

On December 7th, 1969, the Army deployed my husband to a cold, mean war in the hot, hostile place where the environment could eat you alive.

This was the first song he heard in-country. 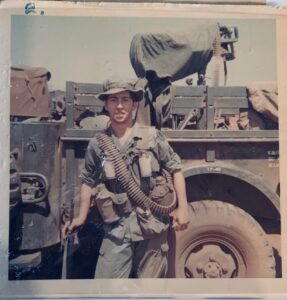 First month in, my husband fought the heat, the humidity, the insects. All brutal as the enemy.  His spanking new grenade carrier vest held a half-dozen.

Hooah!* An acronym for “Heard, Understood, Acknowledged.” The Army battle cry. It’s also Vietnamese. The word spelled V as in Victor, A as in alpha, N as in November, G as in Golf in Vietnamese translates to “yes,” but it’s pronounced “u-ah.” Some used Hooah as a substitute for “okay” or “yes”. Similar to announcing your agreement with “Amen.”

He was infantry. He and the others followed their Lieutenants, their Sergeants… their Chain of Command.

Some soldiers seized on “Chain of Fools” as a reference to the chain of command. 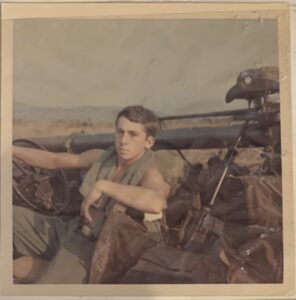 He was an Army grunt, driving a jeep in the dark with the headlights off. Stoned. An 18-year-old in search of the enemy with a 106mm M40 recoil-less rifle mounted on the jeep. That’s one mother of a gun. The jeep’s antenna snagged a low-hanging vine and a neon green bamboo viper dropped into the jeep. They had been warned it was a two-stepper. Two steps and you’re dead. Triangle head and you’re dead. Smoke-your-last-cigarette dead. No. Not true. Poisonous, but not necessarily The-End-Dead. That was a myth to keep the troops alert in the bush. Everyone promptly jumped out of the jeep.

Mail came every other day, pretty much no matter where you were. Important to morale, it was the highlight of the day. He didn’t receive any “Dear John” letters.

“The Letter,” The Box Tops

My husband recalls sleeping on his back in the jungle during monsoon season wrapped in his mosquito net with his arms crossed on his chest under the cover of his poncho. Lying on the ground, he felt the torrents of rain pummeling the poncho as he listened to the noisy night where his sleep aid was exhaustion.

“Riders on the Storm,” The Doors

One night, a heavy creature landed on his chest with a thump, its bad breath in his face, four clawed footprints held tight to his chest, its long lizard tail, thick, hefty. Trailed down his thigh. My husband instinctively flung his arms wide and the creature jumped, landing a couple yards away, then scurried, smash, crash, branches rustling and snapping, it was gone. He was glad it was pitch black dark.

“We Gotta Get Out of This Place,” The Animals

Walking on patrol along the bottom of a ten-foot-deep trench. Looking out for Charlie. He held his breath as a Bengal tiger flew across the sky from one bank to the other above him, an elegant display of incongruous beauty in the midst of primeval fear. 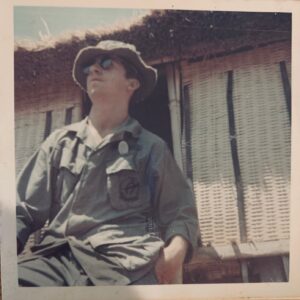 In base camp, a cot, hot showers, deep sleep, a PX, Playboy magazines, beer, music, bags of the cleanest cannabis you ever saw. No twigs. Chopped. Ready to roll. Five bucks. Other stuff, too. Hanoi Hannah. Top 40s. You want it. You got it.

He saw his first tropical beach at Cam Ranh Bay. He recovered there for 30 days. Plasmodium falciparum. Malaria. He used to tell me how falciparum was dangerous—much worse than Plasmodium vivax—but if you beat it, you would never experience a relapse. True.

Till the Morning Comes

My husband realized his condition was perilous when he awoke to find that only his toes were visible before him. A priest in army fatigues with a purple stole draped around his neck was giving him the last rites. His entire body was packed in ice.

“May the Lord who frees you from sin,

save you and raise you up.”

“Sittin’ on the Dock of the Bay,” Otis Redding

After recovering from falciparum, my husband was assigned to the skid of a Huey helicopter for the remaining six months of his tour. He rappelled into the jungle to clear LZs. Landing Zones. Breaking jungle with a machete eight hours a day. Fifteen days at a whack. Purple haze. Like the smoke bombs that guided helicopters into the LZs.

Flying low over the jungle in the Huey, survival songs blasted M79 rocket-launch-loud. Heard easily over the pounding staccato of the rotor blades.

In Nam, the music provided a paradox of stimulation and relief. Hard-hitting and heavy, anti-war or not, it was volume to the max.  Always. 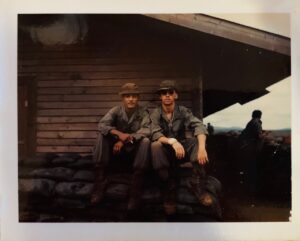 After his year in Vietnam, my husband was stationed at Fort Benning, GA for the remainder of his duty. When he finally returned home, he saw no flag waving at the airport. No Welcome Home parades. Just Revolution. Everywhere. He threw away all his bars and medals. Overseas Bars, Vietnam Service Medals, Bronze Stars. Everything. Fuck it.

He grew his hair long. He drank too much. Dropped acid. Kept a tiny LSD notebook not much bigger than a matchbook with his trip notes. 50 trips. Dates, places, people.

I was still in college then. Safe. Kent State stole the headlines.

Later, in 1973, as a young teacher, I wore a nickel-plated bracelet engraved with the name of a POW soldier. Worn to honor and increase awareness of POW/MIA soldiers. I wore it until the soldier came home. Names of returning POWs were published in the newspapers daily. Amazingly, my POW returned only two weeks after I began wearing the bracelet. It seems to me, I mailed the bracelet back to the supporting organization and they sent it on to him.

Sometimes, in the middle of the night, I hear my husband screaming. Nightmares. Fear. Anger. PTSD. This is new. In the forty-plus years that we shared a bed, I never heard a single nightmare.

“The Eve of Destruction,” Barry McGuire

Mostly resigned to their fate. You can smell the sadness.

My husband survived Plasmodium Falciparum malaria. He survived jungle rot—where the skin on the bottom of your feet rots off and you eventually need to have the soles of your feet scraped. They used to call it Trench Foot.

Prevention is keeping your feet warm, dry, and clean. And changing socks three times a day.

In the bush? in monsoon season? Right.

He flew home—like a lot of soldiers didn’t.

His hometown buddy, the best man at our wedding, found heroin in Vietnam.

The Army dried him out in Hawaii on his way back to the States.

Another soldier, whose mother served them milk and cookies in her kitchen every day after school, has his name engraved on the Vietnam War Memorial in DC.

During the year after my husband returned home, the kid’s mother served my husband milk and cookies again. But now she was inconsolable. Crying with grief. Begging to know, “Why? Why my son?”

The one who visited us umpteen times. The one who kept in touch with us for 42 years? 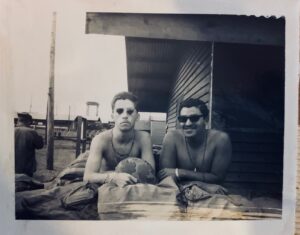 Tony.  He committed suicide ten years ago. I’ll never forget the sound of my husband’s wail when he got the call.

Now my husband has Parkinson’s Disease from Agent Orange, the herbicide and defoliant used to reveal the enemy by stripping trees of their leaves. Dementia has arrived and it’s chasing him down.

I had to take away his car keys. Sometimes he experiences bouts of paranoia.

He says I took his VA ID card.

I remove his ID from his wallet and show him that the ID is there. Expiration, October 2024.

The ID photo shows him with short hair. It was before he grew his hair long again during COVID. Down to his breast pocket long.

I’ve been told to expect this sort of thing.

If I sometimes seem distracted, it’s the background noise of two lives crossing into unknown territory facing an unpredictable enemy.

I hike in the forest by myself. Lost. Not lost.

I escape. I travel to clear my head from time to time. Seeking sanity in wild places.

Now, that wild place is here.

“Find the Cost of Freedom,” Crosby, Stills, Nash, and Young” 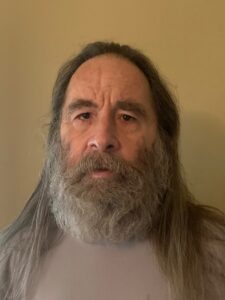 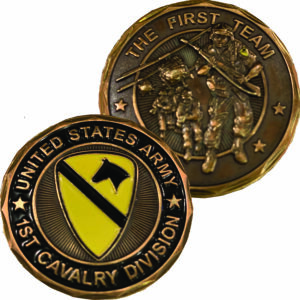