While I was being chased by pugilistic geese and frightened by hoof-pounding Percherons back on our farm in 1955, I was almost totally unaware of the world that existed at the end of the road beyond our mailbox.

Sure, there were those Sunday afternoon drives to my grandmother’s cottage for our weekly shampoo in the lake after the well went dry—because the well always went dry around the 4th, necessitating an alternative to our sacred Saturday after supper bathtub ritual.

Along the way, I saw the signs (literally) that began to awaken the sense of inquiry that would forever motivate my life. “Clean Fill Wanted”. “Happy Hour”.

Likewise, those Friday mornings locked in the back seat of our Plymouth while my mother did her grocery shopping. “Weekend Special. Coca-Cola.” I wondered what Coca-Cola tasted like.

Sitting in the middle of my siblings’ fist jabs, I watched the other mothers entering and leaving with their kids until, at last, my mother returned. Pulling a box of Cheerios from the bag at my feet, I read “…or a reasonable facsimile”.

When I asked about the meaning of these, my mother said “I don’t know”.

She always said “I don’t know”, so before long I stopped asking, and it wasn’t until a few years later that I met the person who would answer my questions.

His name was Holden Caulfield.

He blew my freakin’ mind. Finally a voice I could identify with—although how a boy in California talking about a Pennsylvania prep school existence could have spoken so vividly to me, the barefoot kid in the hayloft, I’ll never know.

He had me on page one at the first mention of “cold as a witch’s teat”. Shocked my little Catholic body to its toes. I had certainly never met anyone like Holden. Until then, I had had to be my own bad influence.

He was no Nancy Drew in a roadster.

“Mummy, what’s a ‘roadster’?” I asked, holding my place in The Secret of the Old Clock with my finger and thumb.

Holden’s voice was clear—shocking, irreverent—yet comforting at the same time. He shared his innermost thoughts with me and I suddenly realized that I was no longer alone.

Today I know that it was the voice of Holden Caulfield that made the difference. A writer’s voice is his most powerful tool.

J. D. Salinger’s Holden Caulfield came into my room that day and threw his stupid deerstalker cap down on my bed. He looked me in the eye, and said “Goddammit, there’s more to life than being curled up in the fetal position every day after school. Get up and get out there!”

His voice spoke with such clarity that there was no doubt he was a real, walking, talking, true to life being.

“. . . I’m standing on the edge of some crazy cliff. What I have to do, I have to catch everybody if they start to go over the cliff—I mean if they’re running and they don’t look where they’re going I have to come out from somewhere and catch them. That’s all I’d do all day. I’d just be the catcher in the rye and all.”

I was so close to the edge of that damn cliff, I wanted to run right into his arms and never open my eyes again.

That’s what a writer’s voice is all about. If I can speak to someone—anyone—with a voice as clear as Holden Caulfield’s, I’ll finally be there, catching those who are running in the rye.

That’s all I’ve ever wanted to do, and if I ever finish editing this damn memoir, I’m going to drive right down to the Vashon Bookshop and buy a copy of The Catcher in the Rye to re-read in the glow of completion. 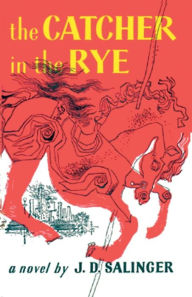