I found myself in a sea of similar sized individuals, in my assigned seat with my assigned school supplies. One fat #2 pencil. Dark blue, not yellow. One black and white patterned composition book. One large pink eraser that didn’t really deserve its name- it constantly called attention to my mistakes by carving blisters in my worksheets.

My favorite were Crayola jumbo no-roll crayons that quivered with their scent of waxy color. Opening the box reflexively triggered a deep inhalation of creativity, and I dropped my chin to the tabletop, the better to partake.

I loved it when the crayons were still sharp and pointy. Alas, my overzealous coloring style flattened them in no time and I rued the day when I had to peel off the label, marking the beginning of the long slog to the end of the school year.

Initially, I wasn’t comfortable with the concept of this group learning experience under the direction of these pale-skinned creatures outfitted in strange black and white garments tied with ropes and crosses and topped with matching headgear. “Wimples”. They wore wimples.

The Kindergarten wimple-wearer turned out to be quite nice, a welcome change from my alternative at home. Once I settled in, I found that I thrived in this environment. My little brain had its billions of neurons firing rapidly, lightning bolts of joyful learning exploding and illuminating all day long.

Of course I never spoke aloud, except for the time when we were asked to state our desired choice of occupation. It was multiple choice. We girls were told that we could be a nun, teacher, nurse or mother (in that order). I chose “teacher.” (I don’t remember what the boys’ options were, but how much do you want to bet that “businessman” was one of the choices?)

Our gigantic kindergarten class of eighty+ students was well documented in a group photo taken at mid-year. In the photo, I’m wearing my favorite green dress with the white cuffs, and staring solemnly up at the cameraman who was positioned high above our group on a stepladder. He wore a suit, tie and fedora while aiming a shiny silver Clark Kent flash camera at us.

The cuffs of my sleeves are folded down, nearly reaching my elbows. This was something I did when I took my place at my seat. First the left, then the right, I set the scene for my favorite fantasy.

I fantasized about the metamorphosis of Cinderella- the “girl of cinders”.
Folding them down instantly transformed me from ordinary Kindergartener to magic-slippered Princess awaiting my Prince. It was my magic Princess dress. Bibbitty-bobbitty-boo! 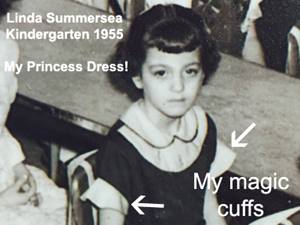