My memoir has a musical current running through it that begins with the energetic rhythms of the Charleston and ends with a sentimental Van Morrison tune.

Blog posts on this page frequently have their beginnings in my musical memories, and many of them are gathered during my aerobic dance class.

I’m used to writing with a playlist at home. Often I’m optimistic for the future, sometimes moody for the present—and contemplative of the past. I get up periodically to move across the floor, yoga dance style, so it’s only natural that I should find myself developing writing themes during grapevines and curls. 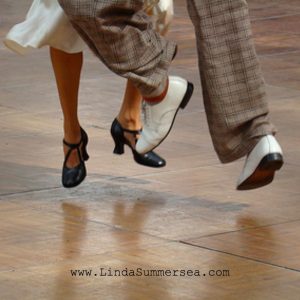 Today was one of those days. Our newest routine involved a combination of  The Charleston and The Jitterbug—the dance steps of my grandmother Mémère and my mother.

I had never actually tried either of these moves but as soon as my feet fell into the snazzy jazzy steps of the Charleston with my arms swinging back and forth, I was drawn back in time to a few days before Memorial Day in 1929. It was Thursday, May 23, five months before the Stock Market crash. Could life have been any more optimistic? The two who would become my grandparents were whooping it up in the rumble seat of their best friends’ Buick after a night out on the town.

Mémère personified the quintessential Roaring Twenties gal with her auburn boop-boop-bee-doo curls cut in a stylish bob. Her fashion was glitzy and glamorous, her Prohibition beverage of choice was brandy and she loved to dance and sing at every opportunity.

Mémère was also six months pregnant with my mother that night.

Her water broke with the impact of a pothole off Main. Her shrieks cut the cool night air as the warm amniotic fluid seeped onto the seat and soaked the hem of her dress.

“Gerrrrald! The baby! The baby’s coming!!”
My grandmother always tended to shriek when she was excited.

That night, the amniotic fluid and the brandy combined in a potent mix.

Mémère and Pépère hastened back to the triple-decker in the Buick. Pépère helped her down onto the running board and then carefully up the three flights of stairs to their walk-up apartment. He could hear my grandmother moaning on the bed as he shut the door and flew down the stairs to fetch the doctor two streets away.

Pépère and the doctor arrived barely in time to deliver my mother. The young doctor shook his head nervously. Mummy weighed a mere two pounds.

There weren’t a lot of options back then for a premature home birth. He washed and dried his instruments at the kitchen sink, placed them in the black leather bag and snapped it shut. As he unrolled his shirt sleeves and buttoned his cuffs, the doctor gave careful thought to the situation.

He returned to the bedroom, where Mummy lay at Mémère’s breast and Pépère sat nervously on a straight back chair. He asked Pépère to find a shoebox.

Dr. Favreau proceeded to swaddle Mummy with a diaper folded over multiple times, and then he nestled her in the shoebox like a robin chick found beneath an apple tree in April. His instructions were simple. “Keep her in the oven with the door open.”

It was a gas oven.

The doctor tapped his bowler onto his head while Pépère accompanied him to the door. “Best of luck to you,” said the doctor as they shook hands. He retraced his steps down the stairs to the street level, slower this time. The milkman looked up from the bottles he was setting in the delivery box on the porch.

Mummy thrived in the warmth of the gas oven on Moon Street. She’s never been sick a day in her life, with the exception of that gallstone operation back in ’74. She’ll be 87 when the lilacs bloom.

The story that blossomed on the notes of the Charleston had been in development for a while, but it took experiencing the dance itself, eighty-seven years after the event, to bring it to life.

I continued to stretch and move and dance, finally coming back to reality with Stevie Nicks’ Stop Draggin’ My Heart Around.

And Tom Petty…”I’m learning to fly, but I ain’t got wings
Coming down is the hardest thing

Well, the good ol’ days may not return
And the rocks might melt and the sea may burn.”

By the time we were positioned on our mats in plank, Van Morrison was echoing off the rafters.

I pulled back to child’s pose for a few minutes, then rolled onto my side with my eyes shut.

I made believe the drops sliding down my cheek were sweat.

Sign up at left to receive these Blog posts via email.